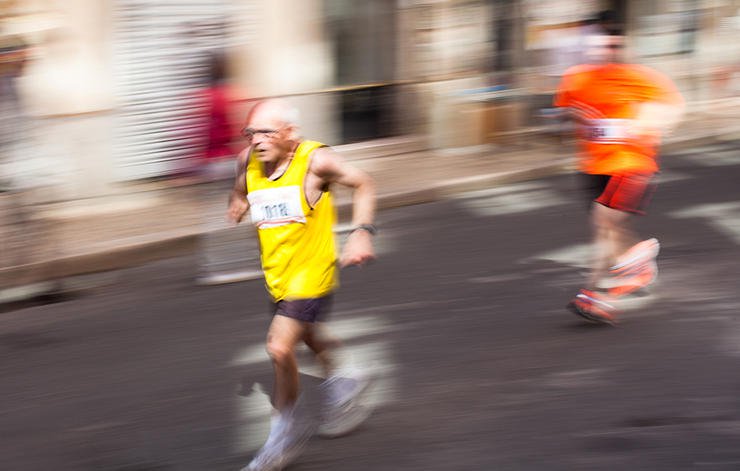 Want to keep active well into your 90s? Look to the places where people live the longest.

Want to live to 100? Dan Buettner knows the secret to longevity, and it’s a lot simpler than you might think. The National Geographic Fellow has scoured the globe for years in pursuit of places where people live much longer than average, and he’s dubbed these regions “Blue Zones.”

These locations boast the highest population of centennials—folks who make it to age 100—and people there experience extremely low rates of diabetes, obesity, heart disease and other preventable diseases. To date, he’s pinpointed five Blue Zones: Okinawa, Japan; the Ogliastra region of Sardinia; Ikaria, Greece; Nicoya, Costa Rica; and Loma Linda, California.  Buettner examined these places to learn the habits of their abnormally healthy humans and chronicled his findings in a pair of books: The Blue Zones and The Blue Zone Solution.

Here are nine of those habits, along with anecdotes from folks who are practicing them as part of the Blue Zones Project, an initiative in which communities across the U.S. try to mimic the Blue Zone lifestyle.

The especially good news? If you’re a regular runner, you may already be doing a lot of this. “There are a whole cluster of healthy behaviors that surround the person who loves to run,” explains Buettner, “and many of them are contagious.”

They Incorporate Exercise Into Their Everyday Activities

“Blue Zone people are nudged into moving on a daily basis,” says Buettner, explaining that physical activity is more about their natural surroundings rather than dedicated trips to the gym. Instead of sitting in an office or on a couch for prolonged periods, they move—frequently. They walk (or bike) to school, to work, to friends’ houses. They make bread from scratch—a labor-intensive process that, Buettner laughs, gives the Ikarian women “forearms like Popeye.” And they garden.

They also keep moving as they get older. “The moment you stop walking, it’s a fairly sharp decline,” says Buettner, which is why based on his findings, he recommends tapering off high impact, cartilage-wearing exercise in older years in favor of lower-impact, more sustainable movement.

Tim Woody, a 51-year-old pastor in Fort Worth, Texas (one of the dedicated Blue Zones Project sites), began his quest to reach age 100 with this step. After suffering a health scare at 49, and soon after hearing about the Blue Zones on his local news station, he backed off his intense weight training routine and began regularly walking and jogging on the trails near his home.

Nearly two year later, Woody remains a convert. “I now record my steps every day and am in a competition with myself,” he laughs. “The jogging and walking has been even more beneficial than the more intense workouts I used to do.”

Fresh fruits, vegetables and whole grains make up the majority of their diet, and beans are also a cornerstone (think: fava, black, soy and lentils). Another staple: nuts. Eating a handful a day may add two to three years of life expectancy, research shows. Most will eat meat occasionally, but usually pork and on average just five times a month. Fish is also consumed, but in moderation. The longest living Americans—in Loma Linda, California—are pescetarians, which by definition involves eating fish.

Middle schoolers at Blessed Maria Assunta Pallotta Middle School in Waterloo, Iowa, another Blue Zones Project site, have adopted these guidelines with fervor. After learning about the centenarian research last year—they were especially struck by the fact that their generation may be the first one with live shorter lives than their parents—they worked with the administration to upgrade the cafeteria offerings. A salad bar was introduced, and canned vegetables were swapped for fresh peas, cucumbers, carrots, celery, black beans and more. Carol Luce, a staff member at the school, describes their zeal: “Sometimes I have to tell them, ‘Ok, that’s enough lettuce now!’” she laughs. She also recalls a time when they denounced chocolate pudding, saying “This isn’t part of the Blue Zones! What are we doing?!”

They Stop Eating Before They’re Full

Okinawans abide by the 2,500-year-old Confucian mantra of “Hara hachi bu,” which reminds them to push their plates away when they feel 80 percent full. The reason this aids longevity: when you stop eating after not feeling hungry, but before feeling full, it helps keep your waistline in check. Woody has implemented this change as well, and can’t recommend it enough: “I don’t feel bloated anymore,” he says. “And my eyes are even brighter.”

They Drink up to Two Glasses of Wine a Day

No, this is not a typo. Sardinians regularly drink cannonau wine, which has one of the highest levels of antioxidants of any alcohol in the world and three times more polyphenols (aka micronutrients that prevent degenerative diseases) than other wines.

Red wine in general has been shown to reduce the risk of heart disease, certain cancers and slow the progression of neurological disorders like Alzheimer’s and Parkinson’s Disease, thanks to plant compounds and antioxidants. This all comes one obvious caveat: overindulging—more than one glass a day for women, and two for men—negates the positive effects.

The root of nearly every disease is chronic inflammation, says Buettner, explaining that most of said chronic inflammation comes from intestinal inflammation that “results from eating lots of crap—but it can also come from the hurry and worry of everyday lives.” Centenarians have daily rituals that reverse this. Rituals like naps in Ikaria, happy hour in Sardinia and taking a moment to remember ancestors in Okinawa.

Another suggested stress-relieving ritual? Running. “Runners have wonderful way to shed stress by strapping on running shoes and hitting the trails,” says Buettner. “It’s better than just about any supplement you would buy.”

Their Life Has Purpose
Buettner posits that knowing your sense of purpose is worth up to seven years of extra life expectancy. In Okinawa, it’s called “Ikigai” and in Nicoya, it’s “plan de vida.” Both translate roughly to: “why I wake up in the morning.”
They Belong to Tight-Knit Social Circles
These social circles come in various shapes and sizes, but all provide camaraderie and kinship that supports healthy behaviors. The Okinawans form “moai” pods of five friends who commit to each other to life while the Ikarians build larger communities that socialize frequently.
Yet They’re Also Part of a Larger Faith-Based Community

All but five of the 263 centenarians involved in the original Blue Zone studies belonged to some faith-based community. While the specific type of spirituality varied, the research is clear: attending faith-based services four times per month can add up to 14 years of life expectancy.

They Prioritize Family
Being in a positive, committed relationship can add up to six years of life expectancy, and Blue Zone people go out of their way to cultivate deep relationships with their children as well as parents and grandparents. Their cultures value old age and aging family members are often cared for in their families’ homes.