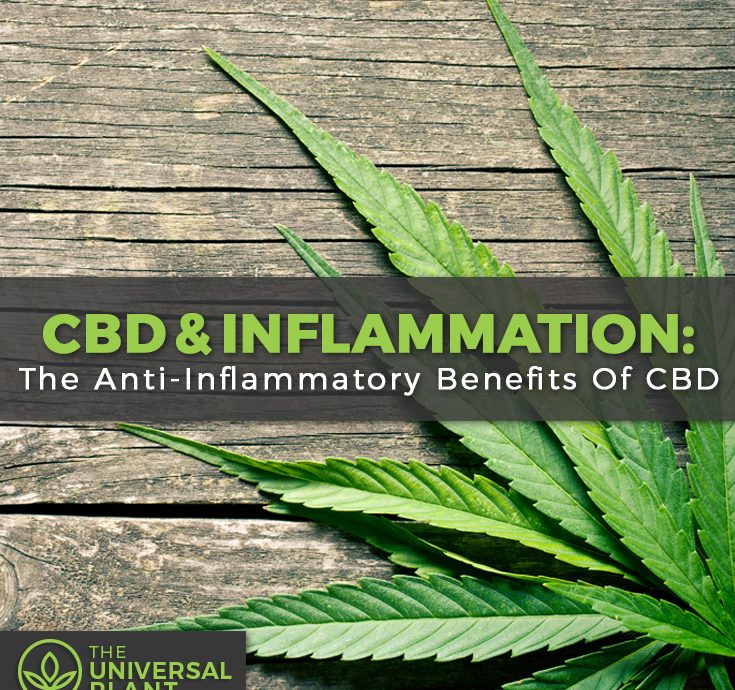 In this post I’m going to outline the collective body of current research on CBD and Hemp Extract with relation to Inflammation. There is a decent amount of research to this point, all indicating pretty impressive benefits of CBD for inflammation, typically looking at inflammation biomarkers (indicators) and positive improvements when subjects use CBD or Hemp Extract over the control groups. CBD oil for inflammation is becoming increasingly more common as awareness around cannabis increases.

The body of research will no doubt continue to grow as more funding pours into this space, and as public interest continues to rise. Also, when cannabis becomes federally legal in the United States, then we will really see a large influx of research funding into the therapeutic uses of the plant.

Research around the compounds in this plant for inflammation reduction is especially important because inflammation is basically a bodily state that correlates to many life-threatening diseases. Many people’s lives can be saved through proper prevention measures, and for those individuals who are deep into their issues with inflammation, they may be able to turn things around before it is too late.

Before we dive into the research around CBD and Hemp and Inflammation, I think it’s appropriate to actually define what inflammation truly is. Armed with this basic understanding, you’ll more firmly grasp the results of the studies I’m going to present to you today.

Inflammation is a bodily response to harmful stimuli.

Many things can cause this response in your body, which is why inflammation is more of what I would consider a “warning sign” rather than a disease itself. Like I mentioned earlier, because it is a warning sign it typically correlates with many different diseases in humans.

The major easy-to-spot signs that you have inflammation issues are: pain, swelling, soreness, fatigue, itchy skin, redness, heat, and even gut issues like Ulcerative Colitis, IBS, and diarrhea.

Inflammation is basically a generic response to a threat to your health. Your body activates your immune system as you try to fight off the “attacker.” Unfortunately for most people, their habits are what causes the inflammation in the first place.

They are attacking themselves!

Bad habits like poor diet, micronutrient deficiencies, excess stress, and constant exposure to endocrine disrupting chemicals like those found in plastics, smog in the air, and even many foods, are constantly bombarding our bodies every single day, and unless you are aware of them, you’re essentially just reinforcing their attack on your body.

It’s no wonder inflammation is such a common thing these days, and autoimmune diseases are increasing in number every single year. We are quite literally enabling this to happen to ourselves. And unless we wake up to this reality, it will continue to happen. Cannabidiol As An Emergent Inflammation Therapy

Inflammation has traditionally been a tricky nail to hammer for researchers when it comes to finding a therapeutic solution. The most promising area of study has involved the endocannabinoid system, namely CB1 and CB2 receptor activation which are G-protein-coupled receptor sites and the ligands that activate them.

Cannabidiol has a distinct way of interacting with the endocannabinoid system that appears very promising for therapeutic applications with relation to inflammation.1 This article will serve as an easy-to-read synopsis of much of the research in this area regarding inflammation correlated with arthritis, Type 12 and 2 diabetes,3 atherosclerosis, Alzheimer’s,4 hypertension,5 metabolic syndrome,6 depression,7 and neuropathy.8

Studies On The Benefits CBD and Hemp For Inflammation

Throughout this article, I will cite specific research papers next to each claim, however I think it also may be helpful for some of you who are more interested in digging deeply into this body of research, to have a specific list of research papers regarding cannabidiol and inflammation that can give you a more thorough understanding of the subject.

There are definitely more papers out there, but this is my short list of recommended reading on the hemp and inflammation:

Neuropathy is caused by microglia (the most common form of cellular immune defense) activation in the brain and spinal cord, which triggers the release of the cytokines interleukin-6 (IL-6), interleukin-1β (IL-1β), and tumor necrosis factor-α (TNFα), which put into simple terms, are pro-inflammatory molecules.

The causes of neuropathic pain itself are poorly understood outside of this basic biological reaction. However, neuropathy pain is present in nearly all common forms of disease such as diabetes, cancer, autoimmune diseases, and MS.9

In a mouse model, CBD was demonstrated to alleviate heat sensitivity and allodynia (neuropathy pain) significantly.8

Two other studies demonstrated a very impressive calming of the immune system microglia/cytokine response along with promising anti-inflammatory improvements in patients with rheumatoid arthritis.910

By reducing insulin resistance and increasing insulin sensitivity, CBD was found in two separate research studies to reduce the initiation of diabetes and the development of latent diabetes in diabetes prone subjects.311 The super cool thing about this, is that this result was also accompanied by a shift from a pro-inflammatory cytokine response to an anti-inflammatory response.

Major effectors of β-cell death in type 1 diabetes are various free radicals and oxidant species, including NO, and infiltrating macrophages are one source of high concentrations of NO and inflammatory cytokines that further enhance NO and ROS formation.12

CBD oil has been shown in multiple studies to block ROS-induced up-regulation of surface adhesion molecules due to high blood glucose levels, which has preserved the barrier function of the endothelial cells,13 thus restricting those pesky free radicals and other oxidant species from infiltrating the β-cells.14

CBD To Help Depression and Anxiety

A large body of evidence in recent years has implicated this similar cytokine inflammatory response15 with depression in humans.16 The most convincing explanation is that the presence of excessive free radicals and oxidant species triggers the microglial cells to signal the release of the pro-inflammatory cytokines, which leads to depressive symptoms.

CBD has been reported to aid in calming this response in medical research.7

This study specifically assessed the anti-depressant and mood-elevating activity of CBD oil finding that its effect appeared to be dose dependent.17

This study posits that this anti-depressant effect of CBD oil is likely due to activation of 5-HT1A receptors in the brain.18

Research in this area of CBD and inflammation is quickly evolving, and many of these papers I’ve cited here have put forward some very interesting theories surrounding promising therapies for people with diseases characterized by inflammation response due to microglial cell activation and the resulting pro-inflammatory cytokine increase.

I think it’s very important to also identify the actual causes of this inflammatory trigger, however countless people across the world are now in this state of poor health due to their own poor decisions (both known and unknown). It may not be their fault, but now it becomes our responsibility to do something positive to help ourselves by first calming down our inflammation response using effective natural therapies, then next we need to identify the causes of our personal inflammation and get rid of those bad habits, whether they’re stress-related, nutrition-relation, or due to exposure to environmental toxins.

Stay strong in the good fight and keep educating yourselves! If you’re interested in learning about where to buy cbd I recommend checking out this popular page on our site: Where To Buy CBD Oil and Hemp Extract