Amazing herbal cures from around the world 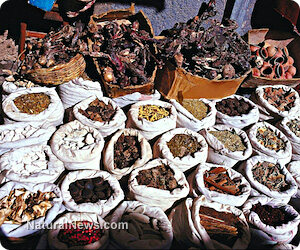 So we start this whole thing off with cancer, since that’s the biggest „mystery“ on Earth. Cancer, the eighth wonder of the world, or is it the ninth? Cancer — that „disease“ (actually it’s a disorder) of the cells where certain dying or „chemicalized“ cells mutate and multiply uncontrollably, then attack your good cells. Scientists all over the world cannot figure out a vaccine or medicine to cure this problem. Or can they?

Then there’s Alzheimer’s disease, again, not really a disease at all. It’s not contagious, and you don’t inherit it either, so forget about that big lie. Yes, it’s „genetic,“ because your genes get screwed up, and oxygen can’t get to your brain. Can anyone say „aluminum and lead in food“? Scientists certainly can’t build a human brain, and they definitely can’t take it apart — to figure out what causes seniors to forget who their immediate family is, and not know how to take care of themselves anymore. There’s just no pharmaceutical cure for that. Dang it! After all, what’s the pill made from that makes you stop eating heavy metals?

Scientists around the world study arthritis too, and they design drugs in laboratories, much the same way that (crystal) meth-heads make their drugs in their RV labs, but they just can’t seem to make a drug that makes all the inflammatory food in America disappear. Maybe some day soon they’ll have their breakthrough, and without side effects!

Everybody (lazy and uninformed people) wants to eat anything they want to, any time they want to, and as much as they want to, and then take a pill to make the pain (and the fat) go away. It just doesn’t work like that. You can’t sit around every day eating high-fructose corn syrup byproducts, hormone-laden meat, pus milk (conventional), rennet (calf stomach) cheese, GMO (genetically modified organism) pesticide-laden gluten, bleached bread and microwave dinners and drinking fluoridated water and expect to live past 50 or 60, without needing help walking, thinking, going to the bathroom and feeding yourself.

Read more: Amazing herbal cures from around the world