I can has cheezburger? Protein cancer risk overblown 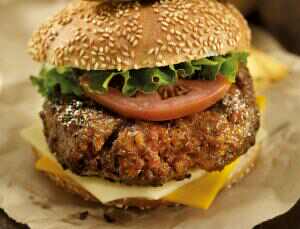 Are you middle-aged and partial to cheeseburgers? If so, you may be concerned by a study suggesting you have a much greater risk of dying from cancer than your peers who favour a less protein-rich diet. But not all researchers agree with the study’s findings.

Morgan Levine at the University of Southern California in Los Angeles and her colleagues analysed a dietary survey of more than 6300 people in the US aged over 50. Those aged 50-65 at the time of the survey and who had a high-protein diet – one where protein supplied a fifth of calories – were 75 per cent more likely to have died over the next 18 years than peers who only got 10 per cent of their calories from protein.

The high-protein eaters had a cancer death rate four times that of their low-protein peers. Statistical analyses showed that the findings only held for animal protein diets – in other words, protein from meat and dairy rather than beans and pulses.

Read more: I can has cheezburger? Protein cancer risk overblown