Glutathione – the mother of all antioxidants 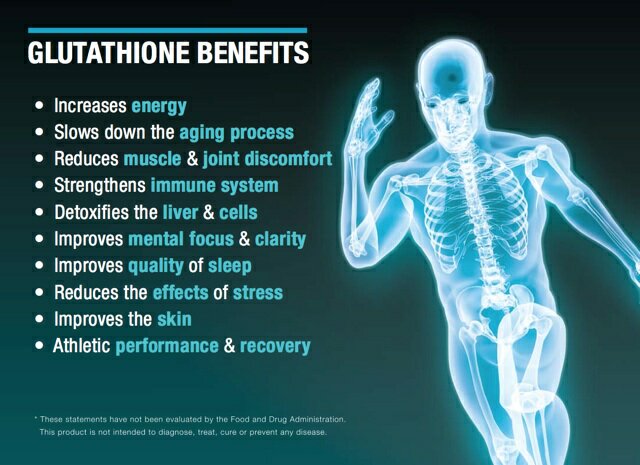 „We have all heard of antioxidants, but have we heard of the mother of all antioxidants? One that is the secret to prevent cancer, heart disease, aging, neurological issues and more? This single antioxidant has been studied in great depth yet most of us know nothing about it and many doctors have no idea how to address the epidemic of its deficiency in humans. We are of course talking about Glutathione (pronounced “gloota-thigh-own.”) This is a powerful detoxifier and immune booster and is crucial to a healthy life. Although the body does make some of its own Glutathione, poor food quality, pollution, toxic environments, stress, infections and radiation are all depleting out bodies glutathione. What is Glutathione? Glutathione is a simple molecule produced naturally in the body at all times. It’s a combination of three building blocks of protein or amino acids — cysteine, glycine and glutamine. The best part of glutathione is that is contains sulfur chemical groups that work to trap all the bad things like free radicals and toxins such as mercury and heavy metals in our body then flush them out. This is especially important in our current world of heavy metal bombardment. Where Can You Get Glutathione? The body makes it, but it’s often not enough in our strenuous environment. Here are some food sources that either contain glutathione or its precursors to help the body produce more.

Read more: Glutathione – The Mother Of All Antioxidants