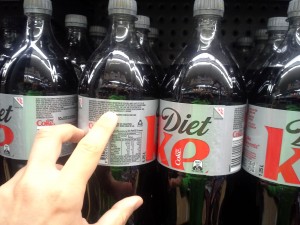 ‘As concerns about health epidemics plague the nation, demand and sales of diet soda have plunged as consumers try to make better choices. As we reported yesterday, aspartame – the main sweetener for diet soda – is one of the most dangerous ingredients used in our food supply, causing seizures and a host of other health issues. In a new study done over ten years and sampling 60,000 women, it was shown that women who drink two or more diet drinks a day have much higher cardiovascular disease rates and are more likely to die from the disease. In the largest study done of it’s kind, The University of Iowa concluded: “…[C]ompared to women who never or only rarely consume diet drinks, those who consume two or more a day are 30 percent more likely to have a cardiovascular event [heart attack or stroke] and 50 percent more likely to die from related disease.’

Read more: New Study Could Spell the End for Diet Soda and Aspartame
Related links:
This Is Your Brain On Aspartame
Aspartame Being Re-Branded as „AminoSweet“
The Shocking Story of How Aspartame Became Legal
Aspartame – A Hidden Schedule II Narcotic