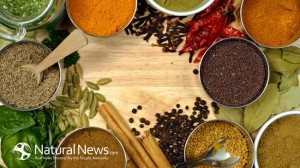 The following seven herbs, many of them popular and already in use in kitchens around the world, can help reduce blood pressure and the need for medications.