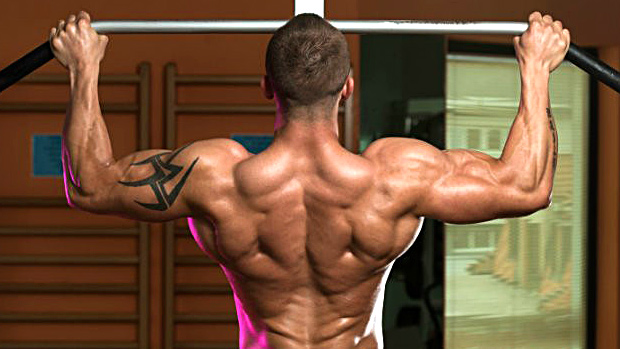 Here’s what you need to know…

Step aside bench press, the vertical pull has taken the title of the most effective and efficient movement to build a bigger, stronger, and healthier upper body.

If you’re stuck in purgatory on the lat pulldown machine or are totally ignoring the vertical pull and its many variations, then this is for you.

The primitive functionality of the pull-up is what makes it such a pivotal aspect of any training program. The vertical pull was once a necessity of life in evading predators and obtaining food sources, but recently it’s become a novelty.

Outside the gym, when’s the last time you’ve pulled up to anything other than the Taco Bell drive-thru? With disuse of this primitive upper body pattern, our bodies as a collective whole have begun to fall apart.

From a postural standpoint, our culture is in an orthopedic epidemic. America is leading the pack to the grave with the popularization of computers and cell phones. Our spines, shoulders, and hips are facing extended periods of dysfunctional postural stresses on a daily basis.

We’re also losing our ability to perceive what neutral position actually looks and feels like. We’ve created a new neutral position, one of postural compensations and stress. Our shoulders are forward and internally rotated, our chest is tight, and our shoulder blades are fixed to our backs.

For those who train with purpose and goals, these daily stresses really put us at a biomechanical disadvantage to perform and stay healthy. Luckily, there’s a cure: a properly performed pull-up.

Sitting Our Lazy Asses on Machines

As soon as humans figured out a way to train in a seated position, we lost the physical supremacy battle as a species. Not only are we sitting all day at our desk, in our car, or on the couch, we’re now going to the gym and „training“ on machines that we can comfortably sit our lazy ass on.

Before you jump on the bash bus, the pulldown machine is a variation of the traditional vertical pull. When programmed and executed properly, it can be a powerful tool for advanced trainees to grow and strengthen the upper body.

However, it’s actually the most commonly butchered upper-body pulling exercise in any stereotypical big box gym. How did we get to this point? Why is the pulldown machine so different than the pull-up, and why should we care?

Rise of the Machines

By plopping down in a seated position, we lose the ability to stabilize the core in a functional position. All of the anti-rotational and anti-flexion/extension movements are lost.

When in a non-neutral seated position, the pelvis is dumped posteriorly, putting increased stresses on our spine and lower back. When we attempt to execute a strengthening exercise, too many of us are in the same position we’re in when we watch Sports Center. Good luck with that.

Momentum and heavy flexion-extension moments at the thoracolumbar spine initiate movement and are the primary cause for heavy compensation patterns in poorly performed pulldowns. The sad fact is, the pulldown is an effective way to work anything but the lats when poorly executed.

Static stabilizers are forced to kick in and aid in movement, along with non-contractile tissues acting as restraints to limit harmful positions. Again, this is a less than ideal environment for muscle building and strength gains.

Own your movement and stand up at the gym!

The lats have a primary action of upper arm (humeral) adduction, extension, and internal rotation, but their secondary properties make it a versatile muscle to train for posture. Strength gains at the lats provide enhanced postural stabilization of the spine and lower pelvis due to its attachment points.

Increased core stability translates to higher numbers in the squat, bench, and deadlift, and an overall increase in total body strength. Simply said, strong and stable lats will allow you to pack on more muscle globally.

There are many problems that arise when executing the closed-chain vertical pull:

A true pull-up will start from a stand-still position with elbows fully extended.

From that position, movement should be initiated with muscular contraction moving the body upwards until the chin is in position over the bar (others prefer the apex of the movement to be chest to bar).

From the top of the motion, the body is lowered in a controlled manner to the starting position. Full range of motion is imperative not only for strength gains, but also to stress contractile tissues that are being strategically targeted.

Mistake #2:  Use of momentum to initiate movement

Let’s get this one straight: the „kipping“ pull-up is not a pull-up, plain and simple. Using momentum to initiate a movement is also known as cheating.

For amateurs that haven’t mastered shoulder girdle stabilization and requisite vertical pull strength, the kip stresses the joints, puts the shoulders in shit positions, and plays a huge role in global warming, among other things.

Just because your body kinda moves in the same direction doesn’t mean the kip is even comparable to a real pull-up.

Newbie CrossFitters love the kip because they can’t complete a real pull-up. I’m not saying the CrossFitters kicking ass on ESPN aren’t amazing athletes though. I’m just making the point that a majority of CrossFit clientele will never, ever perform to that level. Kipping just allows them to participate in a WOD and feel good about themselves.

Setting your ego aside and making the decision to incorporate full range of motion during the pull-up is an absolute requisite for optimal scapular rhythm. Use the full motion and let the body’s natural stabilization and movement patterns kick in. Don’t over think it.

If you’re not able to complete full-range reps, the use of accommodating resistances such as bands can help you get the right range on your pulls. This isn’t an excuse to hang from the bar like a sloth, though, ripping your non-contractile tissues to shreds in the process.

Keep tension through the back of your shoulders at all times while reaching a fully extended position at the elbows for each and every movement.

Quit your half-reppin‘ and maybe your shoulders will move and function better than a rusty transmission!

At the starting point of the pull-up, tension should be initiated to stabilize the shoulder, making sure you aren’t just hanging out on the ligaments and tendons. Squeezing your shoulders into external rotation will cue this tension and optimize your start.

Aside from stabilizing tension, another commonly underused method to increase overall muscular force output and growth-inducing TUT is programming specific tempos into your pulls.

In order to recruit a maximal number of fast-twitch muscle fibers, make the concentric contraction (the pulling up part) as explosive as possible as your chest approximates the bar.

At the apex of the movement, squeeze for 2 seconds to maximize TUT and force output in the shortened state of the biceps, lats, and upper posterior-chain musculature.

Control the eccentric or lowering portion of the movement by trying to „press“ yourself back down into a full tensioned hang. The tempo I recommend for muscular strength and hypertrophy is X120.

In tempo lingo, that means:

Straps are an advanced addition to any pull-up variation, so stay away newbies!

Straps reduce the requisite grip strength needed to complete a set of pulls, placing an increased focus on the more proximal joints and tissues found in the posterior shoulder girdle and back.

When you’re able to complete 15+ reps of strict body weight pull-ups in any variation, only then have you earned the right to strap in.

Variation For a Bad-Ass Back

One of the best things about vertical pulling is that based on your functional and aesthetics goals, you can manipulate your hand and grip position.

Simple modifications can be used to take the stress off a certain joint, specifically train an individual muscle group while not losing the advantages of the entire motion, and target different stabilizers from different angles.

The four most common variations of the closed-chain vertical pulling movements are the wide, medium, and neutral grip pull-ups, along with the chin-up (palms facing your face.)

The semi-supinated grip (palms facing each other) can also play a key role in shoulder health, especially if you have a past history of problems.

If you have rings available, don’t be afraid to use them. The varying hand position can reduce unwanted stress off non-contractile structures of the shoulder girdle while also allowing a more authentic movement pattern of the region.

That being said, the rings will also put a huge focus on shoulder stability and rhythm as opposed to pure strength and hypertrophy type training effects.

While the primitive patterning will stay constant, the muscular stresses and stabilization patterns will vary depending on individual anthropometrics and movement mechanics. Finding your sweet spot so that you can implement a plan of progressive overload along with long-term orthopedic joint and soft tissue health is paramount.

Don’t Be Afraid to Load Up!

Some trainers have been avoiding the maximally loaded pull-up and its variations for decades. This is a damn shame because the vertical pull is just another movement in the training arsenal and should be programmed as such.

What makes the pull-up so intimidating? Most likely the setup and positioning of an external load strapped right in front of your junk. However, with proper execution and set up of the dip belt in conjunction with plate control, loading the pull-up for rep ranges that build muscle isn’t only possible but downright mandatory.

Forget doing 30 reps of pull-ups per set if you’re a backside beast! This is the equivalent of repping out 95 pounds on the bench for 30, and I haven’t seen that since the last time I walked through Planet Fitness, which was never.

Loading a pull-up is no different than loading up any other movement in the gym. Still, I can see how loading a pull-up has gotten a bad rap because of the way the typical gym member does it.

Don’t let this be you:

Hanging the kettlebell from the feet causes an alteration in the natural angulation that the upper spine and shoulder blades are able to achieve when the chest approximates the bar.

The pinched dumbbell between the thighs or ankles causes the primary limiting factor of this loaded pull to be the stabilization of the weight between the legs, not your upper body strength.

And while the chains placed around the neck looks awesome, they can also create some unnecessary shear forces through the delicate cervical spine and neck.

Do yourself a favor and invest a few bucks in a dip belt. And please, please don’t wear it while your hitting the bench.