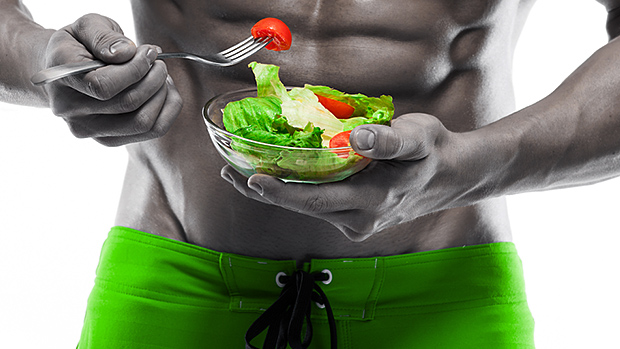 Most of us have an inherent bias when it comes to vegetarian athletes. We assume, because of their meat-shunning ways, that their asparagus-fueled muscles just won’t cut it on the athletic field, let alone produce any muscles worthy of admiration.

We think we can automatically spot these supposedly pasty-faced anemic souls, but time and time again, we’re proven wrong. There are vegetarians in every major sport, and there seem to be plenty of them in gyms, too, where their physiques are often indistinguishable from meat eaters.

There may be a scientific reason for this. Vegetarians may actually have a secret weapon that allows them to grow muscle as easy, or even easier, than meat eaters.

You’ve probably seen those amazing pictures of incredibly muscular Belgian Blue bulls and super-hero sized whippets. They’re said to be „double muscled“ because they have a mutation that suppresses the production of a growth-controlling protein called myostatin.

However, if you can suppress myostatin through the use of some externally administered drug or compound, you could theoretically turn normal bulls, dogs, and yes, even humans, into double-muscled wonders.

Amazingly, some researchers at the University of Bonn have discovered a class of vegetables that may actually suppress the myostatin gene in satellite cells, thereby allowing muscles to grow beyond their normal genetic limitations.

Glucoraphanin is a chemical found in broccoli, cauliflower, and, in particular, the young sprouts (microgreens) of these two vegetables of the Brassica family. When humans eat and digest these vegetables, the glucoraphanin is converted to a substance named sulforaphane, which has long been known to have anti-cancer and anti-microbial properties.

However, when scientists in Germany exposed pig satellite cells (which are very similar to human satellite cells) to sulforaphane, the cells developed into adult muscle cells.

This discovery has the huge medical and economic potential, as the researchers themselves noted: „If its effects are verified and applied to in vivo models, sulforaphane may have therapeutic benefits in the treatment of human skeletal muscle disorders and practical value in meat production.“

Vegetarians are presumably, albeit inadvertently, already taking advantage of the myostatin-inhibiting effects of sulforaphane by eating a lot of broccoli and cauliflower.

Meat-eaters can jump on the same double-muscled garden truck, too, by simply having daily servings of these two vegetables, at least until suforaphane is maybe some day available in supplement form.

Other research also suggests that you should eat cooked versions of these vegetables (as opposed to raw), as cooking makes the nutrients and compounds more bioavailable.