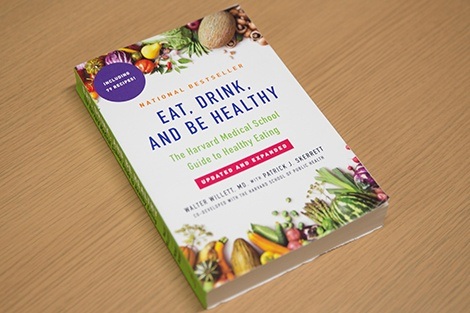 As research continues we are supposed to eat less and less animal protein. Looking forward to the day when they announce that we shouldn’t eat it at all 🙂

Please read and listen to the guideline below:

In 2001, the first edition of Dr. Walter Willett’s Eat, Drink, and Be Healthy: The Harvard Medical School Guide to Healthy Eating made its debut in bookstores, nestled among dozens of weight loss “how-to’s.” Not to be outshined by other flashy titles, it stood out as a non-diet, straightforward guide on what to eat (and what to eat less of) to achieve good health. Dr. Willett’s intention was to summarize in accessible language the extensive amount of scientific research available at the time that illustrated a direct connection between our diets and health and disease.

Sixteen years later, the updated version of Eat, Drink, and Be Healthy reveals a bright cover bordered with fruits and vegetables, a new chapter on climate change, an expanded chapter on healthy eating for special conditions, and more plant-based recipes. However what may be the biggest surprise is that, with the overload of nutrition counsel that has circulated in mainstream media in the past few decades, not much from Eat, Drink, and Be Healthy has actually changed.

The emphasis remains on a healthy diet as a whole, with each food component contributing its role, rather than focusing on any magic-bullet “superfoods.” After highlighting the whys of what to eat, a comprehensive recipe section helps answer the question of how to eat. A primary emphasis remains on reducing one’s intake of refined starches and sugars, while allowing some healthful fats daily. Willett does not demonize all carbohydrates; in fact his recipes are abundant in minimally processed carbohydrates from whole intact grains, whole fruits, legumes, beans, and some starchy vegetables like butternut squash. Animal meats are included but poultry and seafood are the only types featured, alongside plenty of vegetarian and vegan recipes. Vegetables—the one food category many Americans are still struggling to eat more of—are included in most of the recipes in ways that make them aspirational.

Willett discussed his approach based on decades-worth of nutrition research in a recent interview with Harvard Chan’s This Week in Health podcast:

“I make the analogy of an orchestra: A healthy diet is like having all the pieces and having them in balance. And it is really important to look at that whole picture; making sure that our diets are composed of a  balance of healthy foods.”

Plant-based foods are not just emphasized in Eat, Drink, and Be Healthy for reasons of human health but for the planet’s health as well. Willett discusses how the earth’s climate affects food production, and vice-versa.

“We’ve created a food supply that is incredibly destructive to our planet, to our environment, and also damaging to human health.”

The generation of greenhouse gases—including carbon dioxide and methane—increases from the burning of fossil fuels needed for food production and from the natural digestive processes of ruminant animals, including cattle. The earth’s environment has been greatly affected by water pollution from agricultural pesticides and the extinction of thousands of species due to changes in farming practices. Willett initiates a call to action for sustainable food production that includes eating less red meat and dairy foods, shifting to healthier plant-based protein sources like legumes and nuts, buying local and seasonal foods that require the least processing and transport, and reducing food waste.

“Step by step, shifting more toward these healthier sources of protein and more sustainably produced foods  will be good for our family, for our own body, and definitely for  the Earth’s future.”

Listen to the full interview: