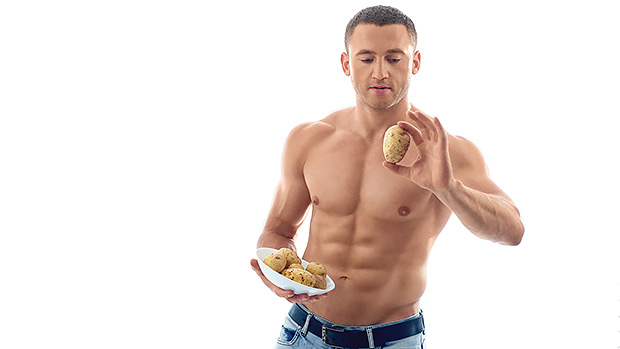 Restricting calories and getting hungry is no fun. Your mind plays tricks on you and you continually wonder whether attaining visible abs is worth the omission of carbs.

Well, a simple switch in starch may be exactly what you need to stay fuller longer and thus reduce cravings for carbohydrates during caloric deficits. Here’s some compelling research.

One study compared calorie-matched meals with three different starches – rice, pasta, and potatoes – which were also matched in calories and carbs (1). All three scenarios were paired with the same amount of veggies and ground beef meat sauce (Bolognese).

All participants ate each of the three meals on three different days in random order. Participants also consumed similar meals on all three testing days outside of the test meals. This was reflective in baseline hunger before testing because hunger/fullness were equal before all three meals, although desire to eat was slightly higher before the pasta meal.

Meat sauce generally pairs better with pasta, not to mention pasta itself is already pretty palatable… at least for me and a few million Olive Garden addicts.

The researchers measured the participants‘ hunger, fullness, and food desire at different points after each meal.

After eating, hunger and the desire to eat dropped more with the potato meal than the rice or pasta meals. The potato meals also caused a greater increase in fullness. This trend was the same even three hours after the meal.

This lines up well with past research showing potatoes are highly satiating even when eaten alone (2).

Why People Think Potatoes Are Bad

Potatoes – especially white ones – have a bad reputation because of their high glycemic index, but that’s quite irrelevant when someone’s already losing weight which nets them health benefits apart from glycemic indexes of food content.

And contrary to popular belief (from the 1990s), glycemic index is not a good measure of satiety. After all, potatoes are measured as high glycemic yet pasta is pretty low (3).

The satiating effect of food ultimately comes down to energy density, not glycemic index. Energy density is how many calories food contains per volume/weight. The less energy dense, the better.

Rice has slightly less energy density than pasta, but potatoes have more than half the energy density of both. Potatoes contain more water, so each bite will weigh more and expand your stomach further, triggering more fullness for the same amount of calories.

In addition, people tend to think of potatoes as fries and chips, which, because of the processing and added oil, skyrockets the energy density of potatoes. But don’t mistake those for the lone innocent potato.

What This Means For You

If you’re struggling with your appetite, then opting for potatoes is the better way to go. You’ll feel more satiated, potentially eat fewer calories, and make it easier to stop eating so damn much.

Potatoes reign supreme as far as starch satiety. So get it them on your plate and get lean without suffering.